AFrame for Over the air

Length should be 15 minutes.

I am really irritating at dinner parties.

I am perpetually bringing out VR headsets and trying to get people to have a go.

I love building and showing off cool VR demos.

Now it is now easier than ever before with A-Frame.

When they do give it a go though

my favourite moment is when they get wowed by the immersion and they make this face:

Getting started with WebVR

I love that face.

My goal is to get you building stuff with A-Frame

so you can make your friends and relatives have the same 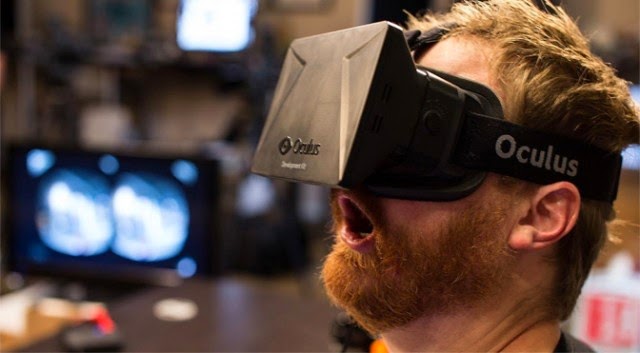 A-Frame a is a JavaScript library to abstract away the difficult and the rote parts of Virtual Reality.

A-Frame is built on top of another library called THREE.js

It also includes the WebVR polyfill.

THREE.js provides a nice way to work with 3D rendering.

A-Frame simplifies everything and abstracts away the more difficult bits.

Allowing us to get started straight away!

It handles a lot of the heavy lifting and edge cases.

I can get started making something straight away with no faffing about. 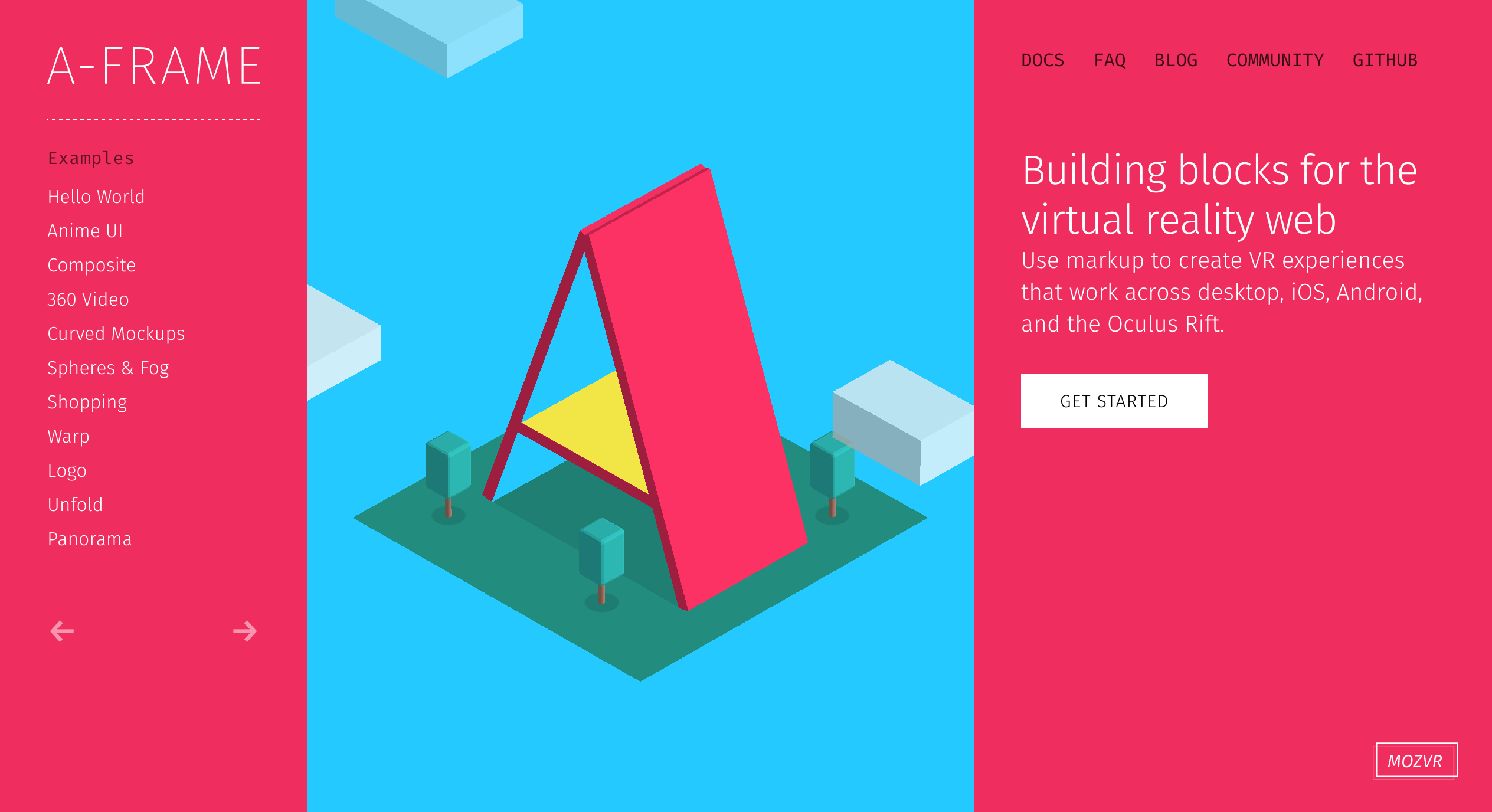 Well for one it looks like html and can be written directly into your markup.

Who here has built a website by typing out html before?

It is much the same. Like HTML you can do an awful lot without writing a single line of javascript. But you can still use JavaScript to add extra functionality of you want.

It is also modular and extensible.

Modular means that I can write a component. For example. A component to give a heads up display or fancy lighting.

Then anyone can include it in their scenes without needing to write complex JavaScript.

It is extensible because my components will be based on other A-Frame components and you can release components that depend on mine.

You are not required to write a single line of JavaScript unless you want to make your own components.

This html from the previous slide gives us this.

But A-Frame gives us lots of hidden extras, all the basics to get started:

All of this functionality can be overridden if you don’t like it or if you want more control.

The Gear VR does not run VR websites out of the box it needs to be turned on.

This is a bit annoying and confusing because my demos wouldn’t work and I didn’t know why.

Testing if WebVR is available

Now your headset is set up to make the most of VR in the web!!!

Try that previous url again and you will see a cool demo, or try out any of the A-Frame demos.

Now we have WebVR set up lets actually build something.

The first thing a lot of people build is a 360 degree photo/video Viewer.

So we’ll look at that first as it is a very simple demo.

Here I have some images I want to use.

These go into the a-assets tag, this tells a-frame to preload these for later.

We override the camera, by defining our own with the keyboard controls disabled. We don’t want too let the user move around in the scene.

The final piece is the sky, the sky is an evenly lit inside out sphere. We give it the image we want to display and it shows it off.

This has all the features we want from a 360 image viewer, you can rotate the camera, view it immersively in vr and all in 7 lines of html 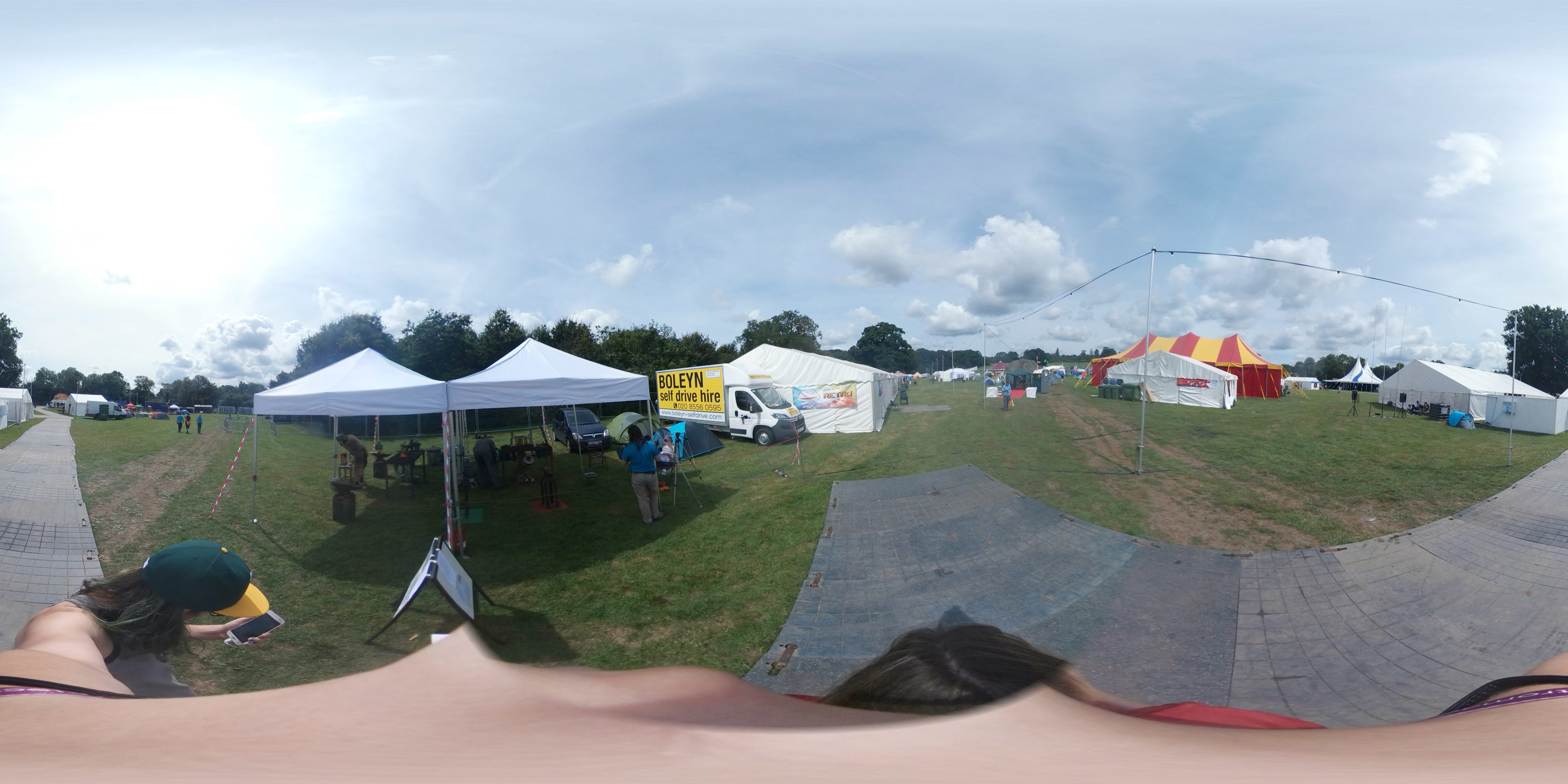 I took it with my 360 camera (no reason to post this I just think it is adorable): 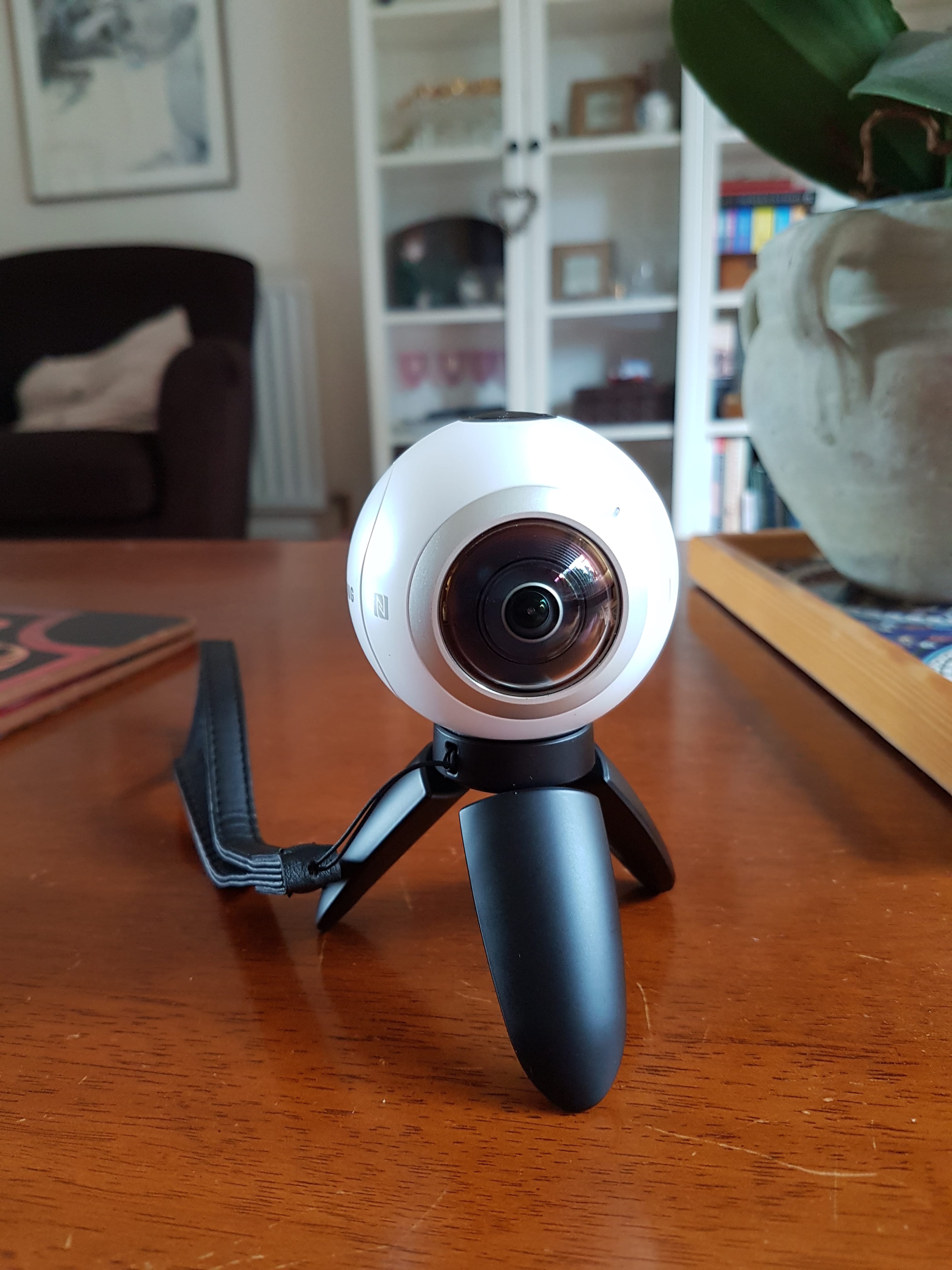 You can, you can use JavaScript to control a-frame just like you would use it on normal html

Here I have written a small script to rotate through some images whenever I click.

Enough showing you my holiday photos, what if you want to actually include a more complex 3D object:

A-Frame comes with a whole bunch of geometric primitives.

In 3D unless specified otherwise flat shapes are one sided

But there is only so much you can do with primitives.

We can make them a little more complex by attatching them together.

By making one object a child of another they become attached together.

The child is transformed in the same way as the parent.

By transformed I mean the way it is scaled, rotated or positioned.

This keeps them stuck together.

This behaviour is known as a scene graphs

It creates a heirarchy of items in the scene. So you can reuse models and attach them to other objects.

E.g. A model bus only needs one chair which can then be reused and attatched to the bus again and again.

This is good because each unique model is expensive but reusing it is cheap.

The example behind me is just a more elaborate version of the last slide.

It is being transformed elaborately

So I am going to step aside for a bit.

To leave you to play with some demos and get some inspiration.

And ask me some questions.

Then in about 10 minutes I will then run through some of my favourite examples of UI interactions.

If you do not find a component which does what you want.

You can make your own components as well.

There is a lot to take in when extending A-Frame for the first time.

I was totally lost.

I reached out to A-Frame community by joining the A-Frame slack channel.

They are really friendly and very helpful.

I asked where to begin and some of the best advice I recieved was to create your own component.

This seemed daunting at first but once I got stuck in and asked for some help it began to make sense.

This really allowed me to get to grips with how A-Frame works. 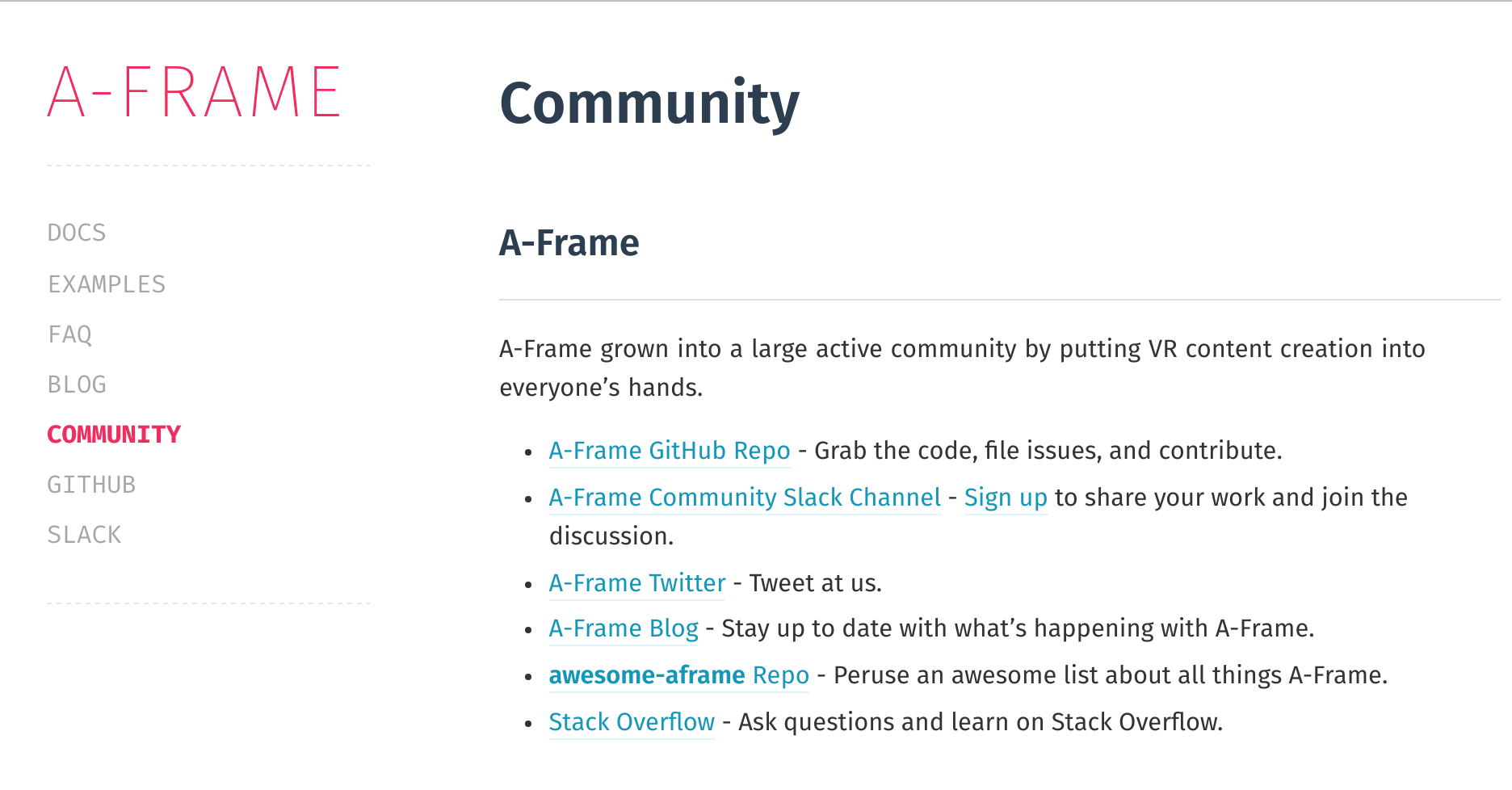 What can Components do?

The most fundamental element in a-frame is the <a-entity>

An <a-entity> is an empty THREE.js group with no geometry or material.

Components are the discreet bits of logic which power A-Frame.

They provide the interface between the mark up (HTML) and the 3D rendering engine THREE.js

They are entity agnostic.

They do not care what they are attatched to.

For example the position component just sets the objects position in 3D space.

The rotation component rotates the entity by an angle in degrees.

More complex components such as geometry or material have properties defined like the style attribute;

They are usually totally agnostic to what they get attatched to.

For example we can take the ‘wasd-controls’ off the camera and attach them to our racing ship from earlier.

A component has two parts a schema and set of call back functions.

The schema defines what data gets passed into the component from the attributes defined in the markup.

The data is passed into init and update functions. It is also available on this.data in any of the component’s functions.

These are functions which are called during the component’s life cycle.

you can call any of these by going el.components.myComponent.foobar();

This example is a real example taken from the a-frame source code.

It is the position component it shows that components should be small, single use and reusable.

Be small, single use and reusable.

The unix philosiphy: "Do one thing and do it well."

Primitives are just a-entitys with a bunch of preset components.

For example this is a very large plane which looks like an ocean.

The mappings section allow easy ways to control some comoonents.